Animals have been my work and hobby; some I keep purely to get to know the species and see how they tick.  My oldest individual animal must be Hannibal the exmoor stallion, who is 22, but I have not owned him all that time.  The individual animal who has been with me longest is a goose named ‘Pretty’ who I hatched out 13yrs ago.  I think some sort of prize must go to my chickens however – they were my first livestock, and the ones I have today are directly descended from those first few I got 19yrs or more ago. 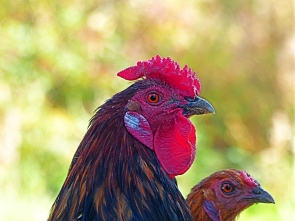 They have been a constant in my life, travelling with me from home to home and county to county, quietly in the background, mirroring the story of chickens and humanity in general.  As “Why Did The Chicken Cross the World?” by Andrew Lawler tells me, chickens have travelled almost everywhere with humans around the globe, unable to fly themselves but making full use of our shipping and airports.  They are our most important protein source and outnumber dogs, cats and rats put together.  And yet, we don’t really know them all that well and the more dependent we become upon them for convenience food, the more distant we grow from them physically as they are locked out of view in sheds (or paddocks if lucky), behind biosecurity controls.

Chickens are descended from Red Jungle Fowl and we almost lost this wild ancestor forever due to crossbreeding with domestic stock.  We only still have purebred animals due to a quirk of fate, as is so often the case – a failed attempt to introduce them to America as a gamebird, which left a few birds, harvested from the last pure populations of the Asian jungles, in the hands of private breeders in the US.  Just like the Jungle Fowl, my original strain only survives due to a fluke, namely one female known as ‘The Red Hen’, and credit should go to her mother before her, ‘The Grey Hen’.

When I moved to the farm I am on now, my chickens of course came with me as they had many times and were released to a free range life from the more intensive one they had known in the garden of a terraced house and then a rented upper floor of a barn.  At that time I mostly kept Ixworths, but I also had a trio of Oxford Old English Game birds; cockfighting fowl (although I did not keep them for that!!), and some of the very first chickens I had bought almost a decade earlier.  They were very old birds by then but they are vigourous as a breed and a few crossbred chicks were hatched out that proved very, very good indeed for the flock’s new lifestyle.

It was one of these crosses which bred with a magnificent hen from a friend, a Light Sussex X Barnevelder.  That red hen was a highly accomplished mother who could sit on large clutches and, as I am actively breeding birds which will competently rear their own young (so I do not rely on electric incubators, which isn’t very resilient…), I was extremely sorry to lose her to the fox, though thankfully, she left many offspring.  One of these was The Grey Hen, and although she was smaller than that original red hen due to the influence of the gamebird blood, she had their fighting spirit and canny-ness and has survived to a ripe old age without my help, (and only one eye due to unknown misadventure!).

In all honesty, I have no idea who or what sired her daughter ‘The Red Hen’ who is a red, more wild-looking version of her mother.  Unfortunately, the farmyard is a treacherous place for chicks and rats, bad weather, foxes and many other hazards polished off all her siblings.  The Red Hen emerged victorious, alone.  This was a point when I was down to just these two hens, mother and daughter. I needed to find a new cockerel or that would be it!

The Red Hen could easily be mistaken for an Old English Pheasant Fowl, an endangered breed which used to be the typical fowl of the Northern farmyard before the dominance of the commercial hybrid.  For this reason, I decided to import some OEPF cockerels as husbands for The Red Hen in the hopes of breeding a strain with vigour due to a highly hybridised past on the female side, which would become purer OEPF over time.  Six cockerels were introduced, brothers, but after a year only one remained – The Captain – as the others succumbed to disease, predators or just general accidents.

(The flock today, a scene and fowl familiar to Northern farmyards for centuries)

The Captain had survivability, but seemed to be lacking in the trouser department and….nothing happened.  No chicks.  Then further disaster struck – my spaniel, who is usually good about the difference between pheasants and our hens, attacked The Red Hen!  I shouted so loudly he dropped her, but the damage appeared to be done and she lay, beaten, quietly on the ground in shock.  I picked her up and put her in a box to calm in the dark, thinking she would prefer to die in peace.  At this point, the reason for the altercation became clear – there were chicks pecking around the yard all of a sudden; she had hatched them in some secret nook or cranny without my knowledge. The Red Hen, warrior that she is, was never going to tolerate a mad spaniel scattering her chicks, and my spaniel was never going to let a bird push him around!

The chicks were gathered and placed with their mother while I sadly gathered up the things I would inevitably need to hand rear chicks.  Later that evening, I checked on her and although she was obviously badly injured, with huge abdominal swelling, no doubt from horrible internal bleeding, she would not give up on her chicks and was brooding them, so I took a chance on her surviving the night and left the chicks with her rather than placing them under a heat lamp.  Amazingly, by the morning she was still alive and starting to move around again.  Against the odds, in a few weeks the swelling and her limp was gone and she was good as new, with a brood of 7 pullets (girls) and a cockerel – each little copies of herself.

And thus, we passed through the genetic bottleneck thanks to the Red Hen’s valiant effort in fending off a spaniel, and the geriatric Grey Hen surprised us all by adding a further 7 chicks by The Captain to the flock.

Now, these chickens may not win any prizes from any show, and no commercial poultry farmer would rate their comparatively poorer carcasses which take 6mo to mature rather than 6wks, BUT, these birds cost me nothing.  They forage entirely for themselves, so it doesn’t matter that the process takes 6mo, because it’s not costing me anything.  And the world feed supply chain can collapse, but my egg and chicken supply remains intact.  They can announce power rationing tomorrow, but due to the excellent mothering skills of my hens, I will never be sweating over an incubator in a powercut, or an electricity bill.  This means that thanks to the Red Hen my poultry flock has realised my aim of resilience and sustainability. 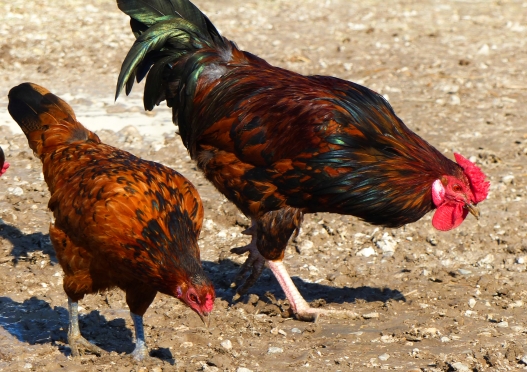