Originally published 07/05/2018 – Since the time of writing we’ve had 4 foals: Hushwing, Butterbump, Snippick and Tiercel (the only colt).  The fillies’ names are old words for Barn Owl, Bittern and Snipe and Tiercel being the only male takes the name given to male falcons.

I have a small free-living herd of Exmoor ponies. They are here for conservation grazing purposes, as pony grazing creates a nice ‘mosaic’ which many bird species appreciate, and birds are what The Yorkshire Ings are really all about! Apart from that though, it’s nice to keep the ponies going too. According to the RBST, there’s less than 500 breeding females and as I have 5 mares, that means I own at least 1% of the breed. Not only that, but I am able to keep them in ‘wild-like’ conditions, running free and practising their survival instincts. Exmoors differ slightly from other breeds of horses and ponies because it’s thought, thanks to DNA testing and other features like their uniform colouring and weather adaptations, that they are in fact the closest living thing to the extinct wild horses of Europe (if not, a surviving remnant of them – the work is ongoing!).

They certainly look very primeval compared to their finer, silkier manmade cousins and when we released the first five mares onto the land we’d set aside for them I was viscerally struck by how ‘at home’ they looked in the landscape, charging through the bogs, their brown hides blending perfectly with the autumn leaves and overgrown, naturalistic grasses. Since then they have blended a little toooo well with the landscape as we haven’t successfully managed to round them up! They possess far more stamina than the cattle and no scrap of interest in working with us, unlike the cattle! 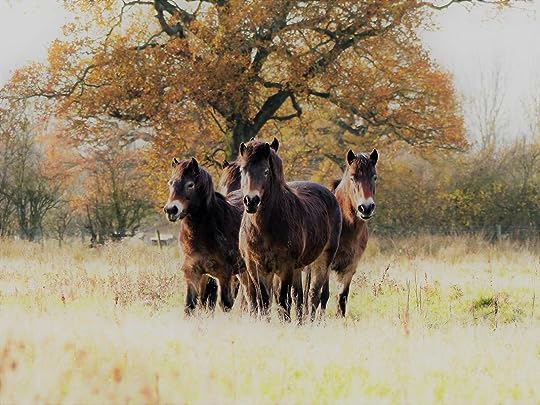 However, I’ve developed a new way of appreciating horse ownership as a result of their presence. They exist perfectly well without my input and I get enjoyment from seeing them do this. The land they inhabit is a thriving ecosystem, full of scattered oak trees, deer, a nesting pair of buzzards and visiting waders and foxes. It’s a privilege to visit and soak this in: like having a gigantic aquarium to watch, I guess? I get as much pleasure from seeing the ponies enjoying their life without me as I used to from riding. I ride very little these days, realising a while ago that I much prefer working with animals eye-to-eye, on the ground, the training process.

So, I’ve fallen in love with the Exmoors, but I’ve never been to Exmoor itself! Finally the chance arose on the way back from a visit to Exeter. I must admit I don’t get down south very often; I love the north! However, I was pleasantly surprised by Exmoor, it was just my type of place…Not only did you have the actual moors themselves, but everything was deer themed! I increased my collection of ‘evocative old words’ while I explored the heritage centre in Dulverton, adding ‘staggert’ to ‘brocket’ and ‘pricket’ to describe young stags and the word ‘boving’ – meaning the roaring noise stags make in the rut. 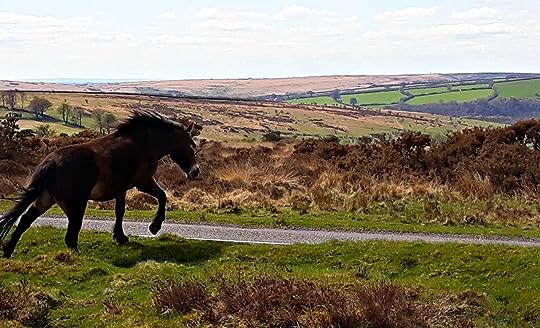 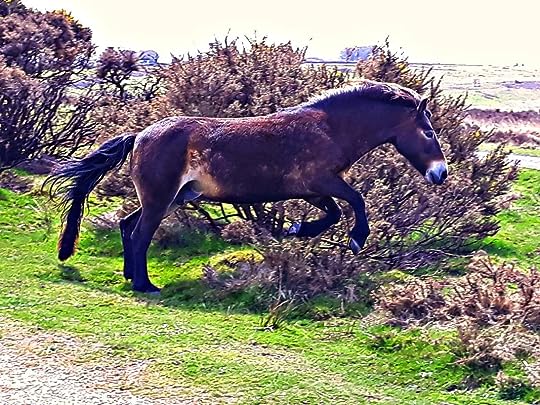 I drove very close to the home range of my own mares, where they had been born and roamed for up to 18yrs before coming to Yorkshire. It was incredible for a ponyfan like me to drive the unfenced moor roads and have the ponies visible all around, like a safari (maybe I’m easily pleased). The views down to the lusher land from the tops were spectacular in bright spring sunshine too. I took a track down into the leafy depths of the valley bottoms to the Exmoor Pony Centre as it was obvious I could not miss this! After touching some Exmoors which were happy to be around humans and almost clearing out the gift shop I wandered to the information boards and added yet another word to my collection – horsebeasts. 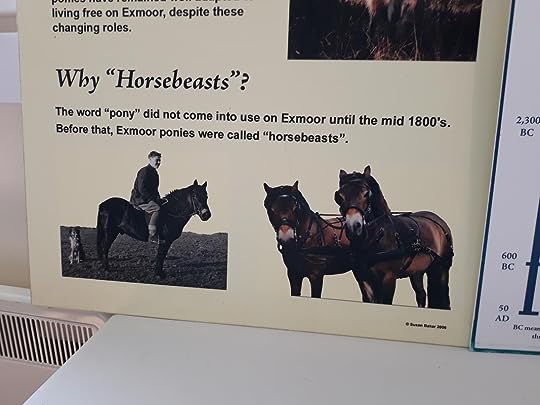 This one is particularly interesting as ever since our exmoors arrived we have viewed them differently to the other ponies we have. They just have this extra ‘something’ about them, a different attitude, even though at least one of my ponies was born feral and lived that way as a colt for 3yrs. They are so different my (now ex) husband was willing to tolerate them without grumble, as he hates equids, usually. He admitted he thought of them as being more like the cattle and thus respected them. The interesting bit is that in our part of Yorkshire at least, cattle are known as ‘beasts’. ‘Beastgates’ were the fees paid per head of cattle grazed on the Ings (marshes). People still freely refer to ‘feeding the beasties’ ‘selling beast’ etc. So, the term ‘horsebeasts’ for the Exmoors seemed especially apt! Perhaps we weren’t the only ones to notice that Exmoors don’t really fit into the category of ‘horse’ as man has made them? 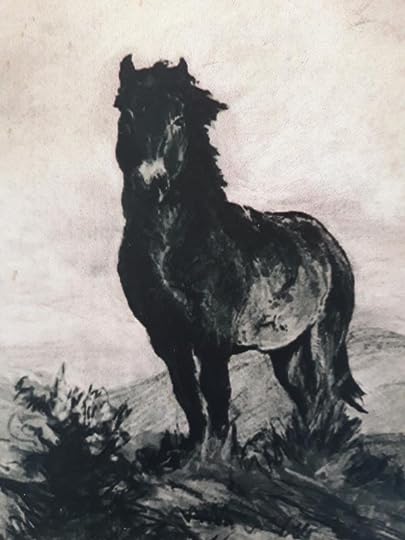 (don’t know who painted this but it’s brilliant so please tell me!)

Anthrozoologist specialising in the past, present and future of our relationship with domestic livestock. Nat has been a shepherd, milkmaid, conservation grazier, animal wrangler for film and live shows and always considered the ethics and sustainability of work with animals. Author of 'Man's Forgotten Friend: A History of the Ox' and trainer of oxen for over a decade, pioneering modern, kind techniques informed by the past. View all posts by N. S. Rose